The Enrichment Center hosted a community altar as part of the Merced County Arts Council’s Dia De Los Muertos exhibit during October and November.  Check out this gallery of photos of the exhibit.

Here are a few photos from the November 1st reception.

And here are just a few of the amazing altars/ofrendas exhibited in the 2nd floor White Box and Skylight Galleries.

Watch out for when the zombies stop dancing and begin the attack.

One year ago, on the eve of the October 2013 Merced Art Hop, the Enrichment Center rolled out the Snail Invasion—a street art project for the community, with a focus on Downtown Merced.

On Friday, October 17, 2014, the EC artists walked up and down around Main Street in Merced, to make another installation of about 300 snails for this evening’s Art Hop.

Over the last year, the artists of the Enrichment Center have installed thousands of small ceramic snails around Downtown Merced. They’ve been tucked into trees, nooks, and holes in the wall, on window ledges and light posts, under bushes, and on top of signs.

The goal of the project is to remind the community that art is all around—unexpected and in the darnedest of places.  A window, a light post, a bush, a sign, a tree…

Here are two snails photographed on Friday, October 17, 2014. The first is from the October 2013 installation. It’s weathered, but still hanging on (or in)! The second is part of the new installation. 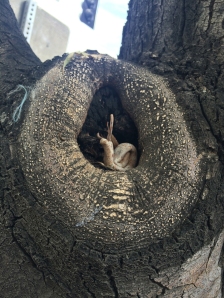 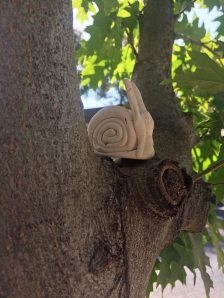 One of the most recently installed snails, October 2014. 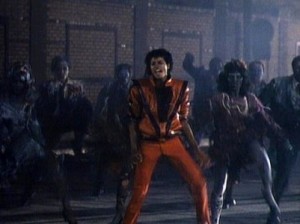 Almost everyone we know has seen the music video for Michael Jackson’s Thriller, where funky and surprisingly agile dead people rise from their graves to rock out.

In preparation for a new performance project (tentatively titled The EC Halloween Special), the EC artists are studying the dance interlude from the music video.

Emulating a dance from video is hard enough. Emulating a dance performed by a bunch of (very robust) zombies is even more difficult. EC artist Larry Sutton pointed out, “I can’t dance like that. Look. He has big eyes. I don’t have big eyes like that.”  Fair point, Larry. Sometimes, make-up and costumes help us get into a new character. And a zombie is certainly a stretch. Larry gave it his EC-best, as did everyone else… even without the big eyes. 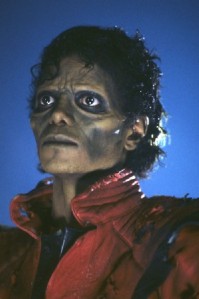